Exodus, Wandering Jew and My Mortgage

The Jewish religion and the Jewish history have a large influence on us today. The effect is felt especially in subjects related to housing (or maybe habitation is a better word?). We all want a permanent house since the days of Exodus, so how come every one wonders there is a housing crisis?

Even in the bible everyone wanted a home

The story of Exodus and the Hagadah in general symbolizes (for me) the creation of the ancient Jewish frame of mind which also created the “Wandering Jew”. A whole nation, feeling enough is enough, and starting a journey towards its home (or so they promised). The ancient will of Jews to establish a home (and not just temple) continues to these days.

Exodus, “2,000 years of exile”, “the wandering Jew”, the housing crisis – these are all related to the Jewish and the Israeli existence, if we like it or not. ordinarily, I do not discuss religious subjects, and I sure as hell don’t pretend to know them thoroughly, but I do allow myself to connect between the bible, history and current days to come to a conclusion about the housing crisis and the lost generation (What is the conclusion? read till the end).

What is a home?

A rooftop over one’s head always stood for shelter and safety – a place to grow up, a place to grow your children and grow many generation of the family. It started from the prehistoric man taking over caves with a big wooden club, went on with the “technology” of building houses from stone, mud and any other material, and goes on to nowadays in the Israeli desire to own a house (at almost any cost, and on the account of the state of Israel – but more on that on another time).

The word “home” symbolizes something different for each and every one of us – mainly because of the people who filled the house we grew up in. For some, home is a refuge. For others it’s a place to be surrounded by friends and family. The desire to have a home is embedded deeply in to our culture and mind. So deep, we are certain the privilege to own a house is a basic right. That is, of course, a mistake, just like the next paradigm:

This is also embedded in our mindset – the male is responsible for financing, for security, for a rooftop over their family’s heads. Now, how come a dad who’s fighting for parental equality saying something chauvinistic like that? Well, mainly because our culture is still, mostly, chauvinistic. True – nowadays equality is being fought for, the women are working and earning more, and yet – a man who is not able to put a roof over his family’s head (and I mean a roof he owns) – will be treated by society as a failure. Same as we yearn for a home since the days of Abraham, Isaac and Jacob, we still expect the man to provide and support his family.

On a personal level

I myself find myself defined by this “setting” – I am a man, a father, a family man, and I want to provide my family with its basic needs. I see myself responsible for money and finance, putting food on the plate and a rooftop over our heads. My wife is a full partner in all of these, and in creating income. Nevertheless, I still feel the need to have more (for reassurance, not more to buy things we don't need).

When we had the discussion about purchasing a house (and not because we were able to on our own. the parents helped. a lot) my wife and I had very different opinions. I, being the rational person that I am, claimed it was not the time, and if anything an apartment for investment would be smarter, and we shouldn’t purchase for large amounts, and other rationalization which made no impression on my wife. My wife, being the motional person that she is, wanted a dream house (on a very limited budget), close to our parents (because we need someone to help with the kids), a house we will live in (“investment? No way!”), and other emotionally spiced arguments – which made it very hard for my rational judgment.

Yes, my wife is also a part of the “wandering Jew” paradigm – what is a family without a home? And at some point, after realizing rationality won’t work, I also understood where it came from. My parents raised me and my brother under a roof which I knew belonged to them. I had the very comforting feeling that we can’t and we won’t be kicked out of my parents’ home. We’ll always have where to go to if needed. So her emotions made me backtrack and check again, read more, understand better and realize – it isn’t getting better in the near future.

A for assurance, B for bringing money home, C for comfort and D for dealing with it all

I want to give my family the same assurance and security I had as a kid – They will always have a home to come back to, no matter where they go and no matter what they do. I want my kids to know mom and dad have always got their backs, keeping them safe. Do I believe it is only my job to do so? Hell no. I am the man, and I will do the best to bring home the money, but I expect the same from her. We both run the house, we both raise our children, we both work and we both decided to buy a house. 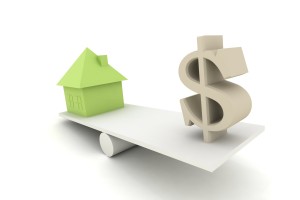 Buying the house was one of the hardest decisions we ever made as a family and as a couple. It affects our present and our parents present (they gave up some hard earned money), it affects our future, and our children’s future. This is a decision which represented not only the desire to own a house in Israel. It mostly represented an educated decision that it isn’t gonna get better soon.

And what about the conclusion I promised?

The conclusion is this: the thought we need to own a house is so deeply embedded in our existence that we forget that acting by that thought exactly may cost us everything we have worked hard to earn. The yearning for a home and the willingness to buy a house at (almost) any cost may bring the family to its knees. High debts, losing the house to the bank, and leave us without anything. As strong as the desire of the Jewish nation for a home, we still need to think reasonably and know when to give in. When the house and home is more of a risk to our family than a shelter.

I bought an apartment not because I wanted to own a home – but because both I and my wife thought it was the smartest decision, at that time and place. Would I say anyone should own an apartment? Definitely not. To this day I am not certain if this is the right decision. Only time will tell if I will be able to give my kids the same assurance and security my parents gave me.