blog – בלוג – אבא ברק » How have I come to schedule sex? Or in simpler words, sex after birth

How have I come to schedule sex? Or in simpler words, sex after birth

At first there was sex. And it was awesome. Then we got pregnant, and there was still sex, and it too was awesome. And then Idan was born. There is still sex, but everything changed. So how have I come to schedule sex? And how does sex after birth even happen?

Let’s be clear – this post is about sex after the child is born (or more precisely, the lack of sex), and the difficulties since the birth. Two things have to be made clear – 1. I love my wife a lot, and she loves me. 2. I will avoid sexual images and terms as best as I can, though it may be hard to do.

The pregnancy was awesome

After a long time of having to do sex (apparently getting pregnant isn’t that easy..), we finally did it. In the beginning, the sex was weird. How do you have sex during pregnancy? We were both unsure (not to mention the weird thoughts running through your mind – what happens if I hit the baby, does it hurt, and how to deal with her changing body?). Then, somewhere in the second trimester, she realized she looks great pregnant, the hormones somewhat balanced, and there was more sex. Still weird, still weird thoughts, and yet – a great sex filled with love. And it stayed that way to the end of the pregnancy. However, we can’t deny sex lost its place in our priorities. It lost to buying things for the new baby to come, sleeping, and since my schedule filled up with work – trying to keep up while maintaining a relationship.

In my perspective, she looked amazing. Not only did she glow from happiness and joy, she radiated femininity in a level that was never there before. And me, like a fly to a light, only got more and more attracted. Not only that, hormones were in my favor in that period. She was more attracted to me as well 

And then came the birth

24 hours of labor. 10 hours in the delivery room. 6 epidural shots. One baby. One amazing baby, sweet like no other, which we fell in love with head over heels. That baby came out without leaving a lot of damage, and still – I understood there won’t be sex any time soon. So I gave my wife the time to heal. Like two days. (Just kidding!).

Luckily, I did not suffer from the “Madonna-whore complex”. Shani is the mother of our child, and also my wife. And I still find her very attractive, just as much as she was before the pregnancy and maybe even more. She is also the amazing saint taking care of our baby in a dedication that sometimes leaves me in awe. On the one hand, during the day she was the amazing mother. Then again, at night, after Idan went to sleep, I wanted to feel Shani again. But I had to wait.

If you thought it was only fatigue that got the best of us, there were a few more issues to deal with. First of all, for every pound Shani gained during pregnancy, I gained half. For every pound she lost since birth, I lost none. So I am chubby, I don’t work out, and working my ass off. And Shani? A woman after pregnancy with a few extra pounds and a needing baby. Yep, this situation didn’t help neither of us to feel sexy, and surely not to want sex. I mean we do want, but then comes the next issue: 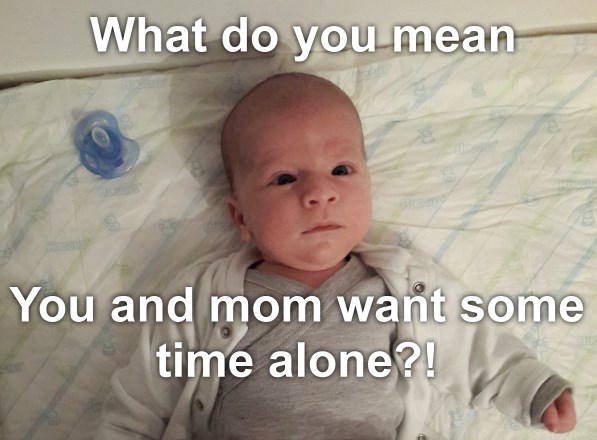 So when do I schedule sex? Next week, around eight-ish works for you?

Yes, coordinating sex when there is a baby around is a serious headache. Until you have found the time, you start making out. And just as the shirt drops, you’ll hear a small whining. You’ll ignore it, hoping it will go away. The pants come off, but the whining turned in to a full on crying, and at that stage – you can’t ignore it anymore. So one of you gets dressed, and calms the kid down. If you managed to calm him down, he’ll go back to sleep for a while. And then, just as Murphy would predict, somewhere in the act, he will cry again. And you’ll try to ignore it. and you’ll find out you can’t.

You’ll start feeling stressed every now and then. Maybe something is wrong with our relationship? Maybe we are not attracted to each other as we used to? Maybe I lost some of the charm? Or maybe it’s her not feeling as attractive as she used to? Telling her she is perfect won’t help, and neither will telling her I love her just the way she is. The stress is evident, and it’s not easy.

So we gave up on the stress. We have sex when we can, want and capable. We probably do it on the expense of sleep hours that we’ll miss. But if you ask me, it’s worth it. It’s challenging, but in a good way. if previously a bit of kissing and touching would lead to the right place, today it’s a lot more complicated. It requires planning, it requires will. It requires patience and tolerance. But that all part of the deal, because everything changed.

Despite her interest to avoid sharing this information with the world. If you meet her, don’t talk to her about this post. I won’t have sex. Not after birth and not ever. We won’t have another child, and you won’t have anything new to read.

The Hebrew version can be found here